An interview with Jeffrey Qi and Emilie Beauchamp, International Institute for Sustainable Development

The recently concluded 27th United Nations Climate Change Conference of the Parties (COP 27) was the largest UN Climate Change Conference, topping almost 50,000 participants. Headlines and analyses are trying to make sense of what was (and wasn’t) accomplished in Sharm el-Sheikh, Egypt. Many have celebrated the significant advancements COP 27 made with the creation of a specific fund for loss and damage (L&D). Yet, some remarked that COP 27’s slogan—Together for Implementation—remained words on paper, with little achieved in facilitating raising ambitions for implementing the Paris Agreement. For many, stagnating mitigation ambition soured this breakthrough in L&D. Amid the politics, it seemed that many countries had put adaptation on the back burner. But despite the media limelight shining primarily on L&D and mitigation, countries reached substantive outcomes on adaptation at COP 27.

A common thread throughout COP 27 adaptation negotiations was about the central role of National Adaptation Plans (NAPs) in developing countries’ efforts to enhance adaptive capacity, strengthen resilience, and reduce vulnerabilities to climate change. We interviewed two of the NAP Global Network Secretariat’s experts, Emilie Beauchamp and Jeffrey Qi, on the takeaways from adaptation negotiations at COP 27, their implications on countries’ NAP processes, and what they mean for future adaptation discussions at the global level.

What was the significance of this COP?

As the first COP after the completion of the Paris Agreement implementation rulebook, COP 27 was considered an “implementation COP.” This means that the Paris Agreement process has now transitioned from more political negotiations on guidelines and rules to facilitating and reviewing implementation. It was also being advertised as a developing country COP, an African COP. With that, there were high hopes—and expectations—that adaptation would be one of the focuses of this COP. 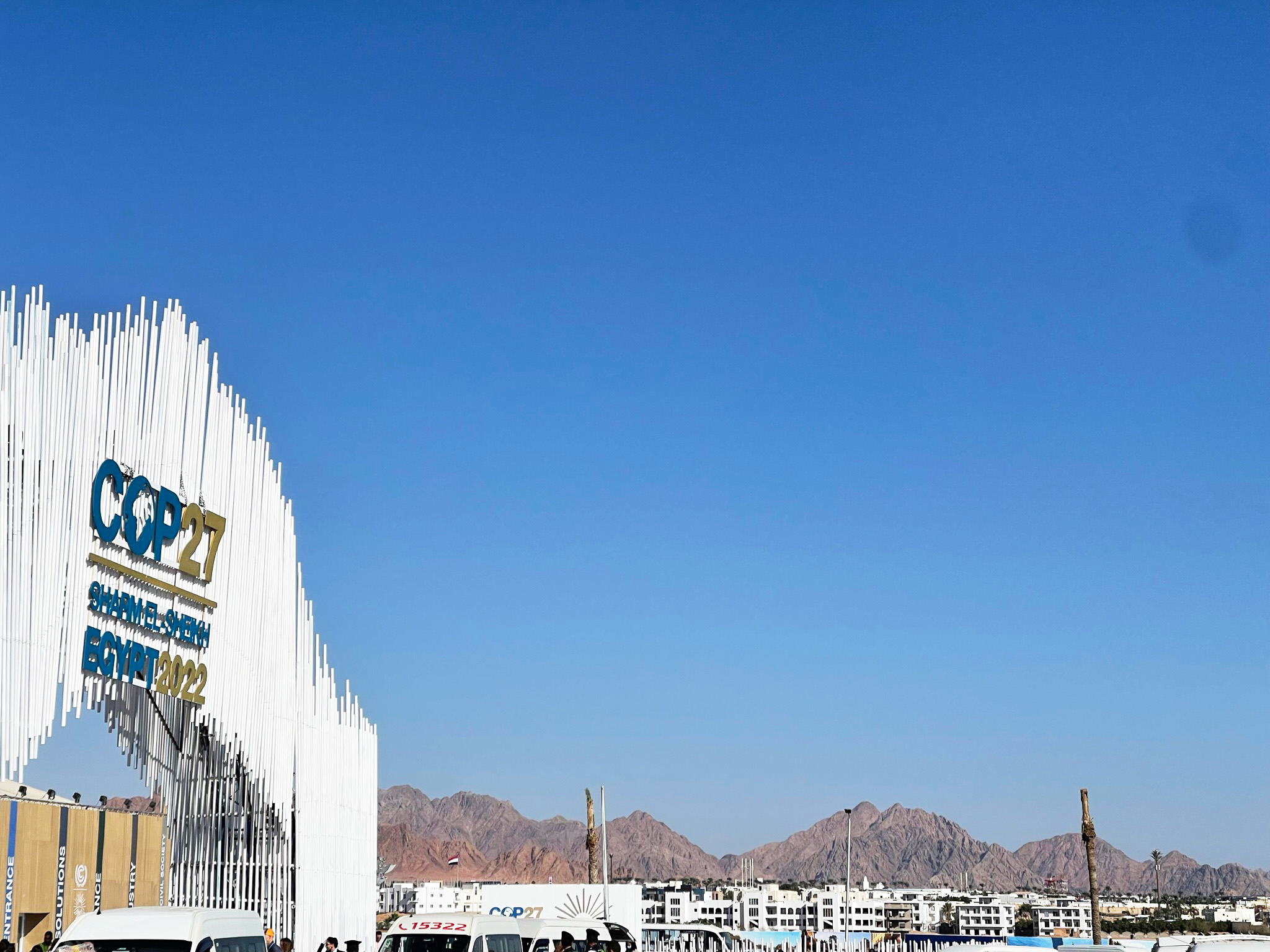 The sandy mountains of Sharm El-Sheikh, Egypt, behind the COP 27 venue.

What do you see as the main takeaways for adaptation at COP 27?

First, we heard the strong desire from developing countries to accelerate the transition from adaptation planning to implementation, but they need sustained, long-term support to achieve this. This sentiment was shared across all adaptation-related negotiation items where developing countries highlighted their progress in national adaptation planning and the persistent challenges, complexities, and delays experienced by them in accessing funding and technical support. Communicating and reporting country adaptation needs, priorities, and activities is necessary to ensure adaptation implementation is effective and adequate. With the adoption of the new voluntary guidance for Adaptation Communication and the first submission of the Biennial Transparency Report under the Enhanced Transparency Framework, countries can leverage their NAP processes to prepare both of these reports.

Second, countries reiterated the centrality of NAPs in maintaining a common thread across adaptation discussions at the country and the international levels and in shaping the move from planning to implementation. During the negotiation item focused on reviewing NAPs, countries agreed that the NAP process remains a primary avenue through which developing countries can articulate their adaptation priorities and needs.

This shows in NAPs' rising momentum. As of December 3, 2022, 40 developing countries have submitted NAP documents to NAP Central, with 25% of them being submitted in 2022. Having said that, the NAP decision text and the decision text on the review of the Least Developed Countries Expert Group (LEG) both echoed concerns about the significant number of countries unable to submit a NAP due to slow access to finance. While several countries are currently undergoing a NAP process, many of them still require sizable resource mobilization to bring their NAP across the finish line.

Third, we saw significant progress on developing a framework for the Global Goal on Adaptation (GGA) as part of the Glasgow–Sharm el-Sheikh work programme (GlaSS). At COP 27, countries captured a draft framework that will guide the remaining workshops of the GlaSS in 2023. The draft framework is significant because it provides a basis for deciding on how to assess collective progress on adaptation under the Global Stocktake (GST). After two weeks of difficult discussions, countries converged around the proposal that the overarching dimensions to assess adaptation should reflect the adaptation and/or NAP process: the iterative cycle of assessing impact, vulnerability, and risk; planning; implementation; and monitoring, evaluation, and learning. Countries must now prepare to discuss this draft proposal with the aim of adopting a framework at COP 28. More immediately, countries must agree on what information about the GGA can inform the first Global Stocktake by the June subsidiary body sessions in Bonn. 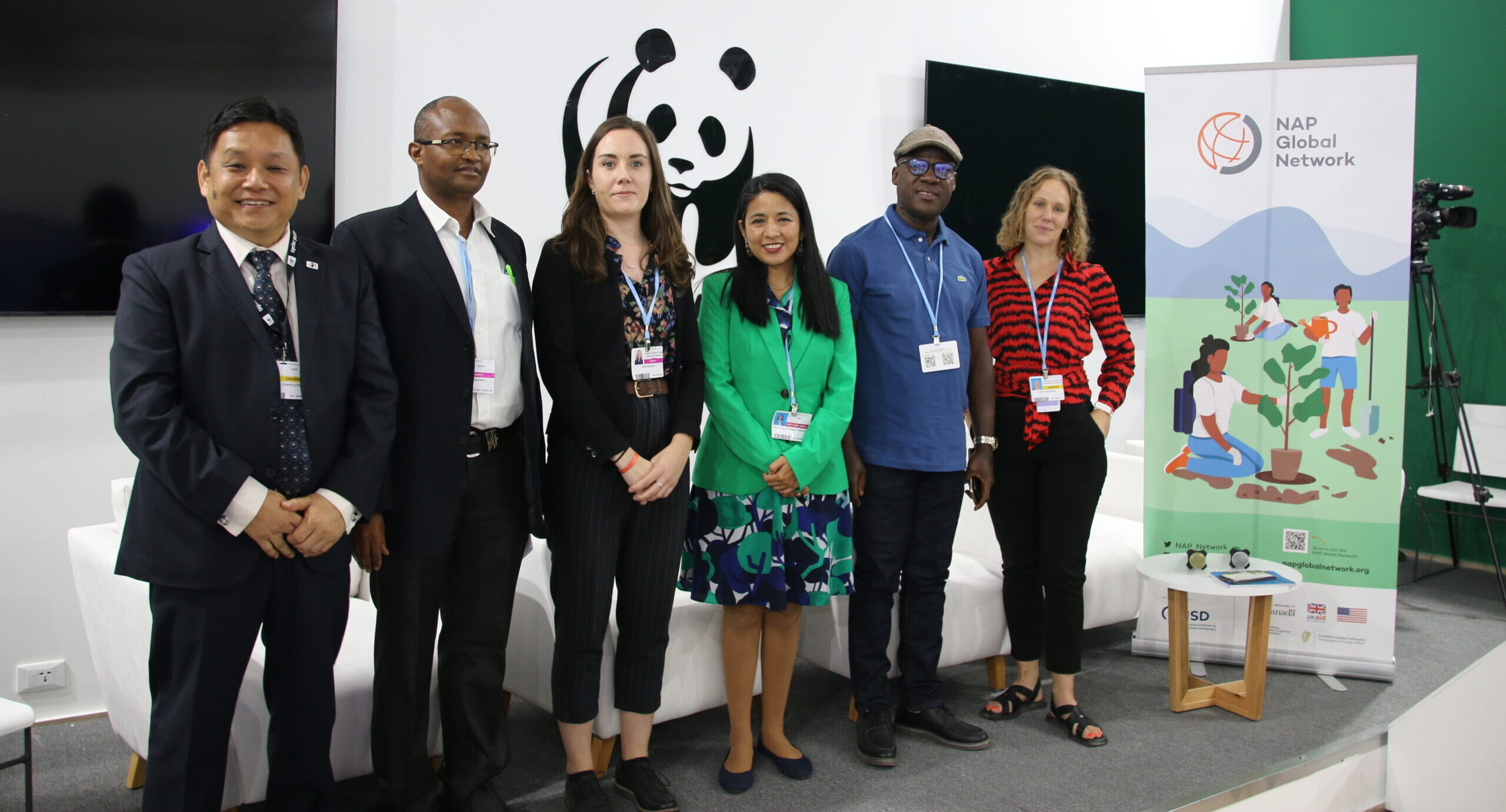 Finally, we saw recurring tensions on finance play out during adaptation negotiations. At COP 26 in Glasgow, developed countries pledged to double the provision of adaptation finance from the 2019 levels by 2025. A big focus for developing countries at COP 27 was to hold their developed country counterparts accountable for this pledge.

This inevitably resulted in stormy dynamics in the adaptation negotiation rooms. While developing countries demanded stronger language on adaptation finance, developed countries raised equally legitimate procedural concerns about what each negotiation room could and could not do. For example, that finance-related negotiations should take place in finance negotiations, and not, for instance, in the NAP negotiations. While negotiators were able to resolve most of the contentions, these dynamics demonstrated the problem of having adaptation issues scattered across the negotiating agenda, siloed from each other and from other key pillars of the Paris Agreement.

Still, decisions about the main three finance mechanisms of the UN Framework Convention on Climate Change—the Global Climate Fund, the Adaptation Fund, and the Global Environmental Fund—can hopefully ease the access barrier and streamline the accreditation and application process for securing funding. The final texts captured the urgent need to streamline the overall accessibility of the funds and of the accreditation process to access the funds. For example, the Green Climate Fund was instructed to enhance its support toward helping developing countries develop project pipelines and access funding for implementing the adaptation actions identified in their NAPs. With new pledges of over USD 230 million to the Adaptation Fund, there are hopes for a better-funded future for adaptation.

What does all this mean for practitioners involved in adaptation planning and implementation?

Adaptation progress happens on the ground—not in negotiations. The slow progress on adaptation negotiation does not represent the efforts of governments, practitioners, communities, and other actors at national and local levels, who are working every day on adaptation planning and implementation. That will be for the Global Stocktake to capture.

But global discussions nonetheless provide mandates and guidance to countries, informed by on-the-ground experiences. Altogether, the adaptation discussions at COP 27 provided a basis for translating negotiation outcomes into practices that will facilitate countries’ implementation of adaptation actions.

At COP 27, a list of key factors emerged from the Global Stocktake’s Technical Dialogue, as well as from the NAP, GGA and LEG decision texts, for national governments to deliver adequate and effective adaptation planning and implementation:

Ensuring these factors are integrated into the NAP processes is crucial. Yet achieving this integration is difficult without the funding promised by developed countries. As a council member stated during the recent Global Environment Facility Council meeting, “adaptation funding for the poorest and most vulnerable nations is not an expense, it’s an investment in the safety and wellbeing of millions of people.” While factors for enhancing adaptation actions are becoming clearer globally, nationally, and locally, the road to successful implementation remains challenging without continuous access to funding.

Already looking toward COP 28, strong commitments on adaptation must emerge without having to compromise other discussions in L&D and mitigation—and, of course, the need for enhanced finance across the board. The world must wake up and recognize the urgency of transitioning from adaptation planning to implementation before it is too late, before our options to adapt become limited and we begin to experience irreversible losses. 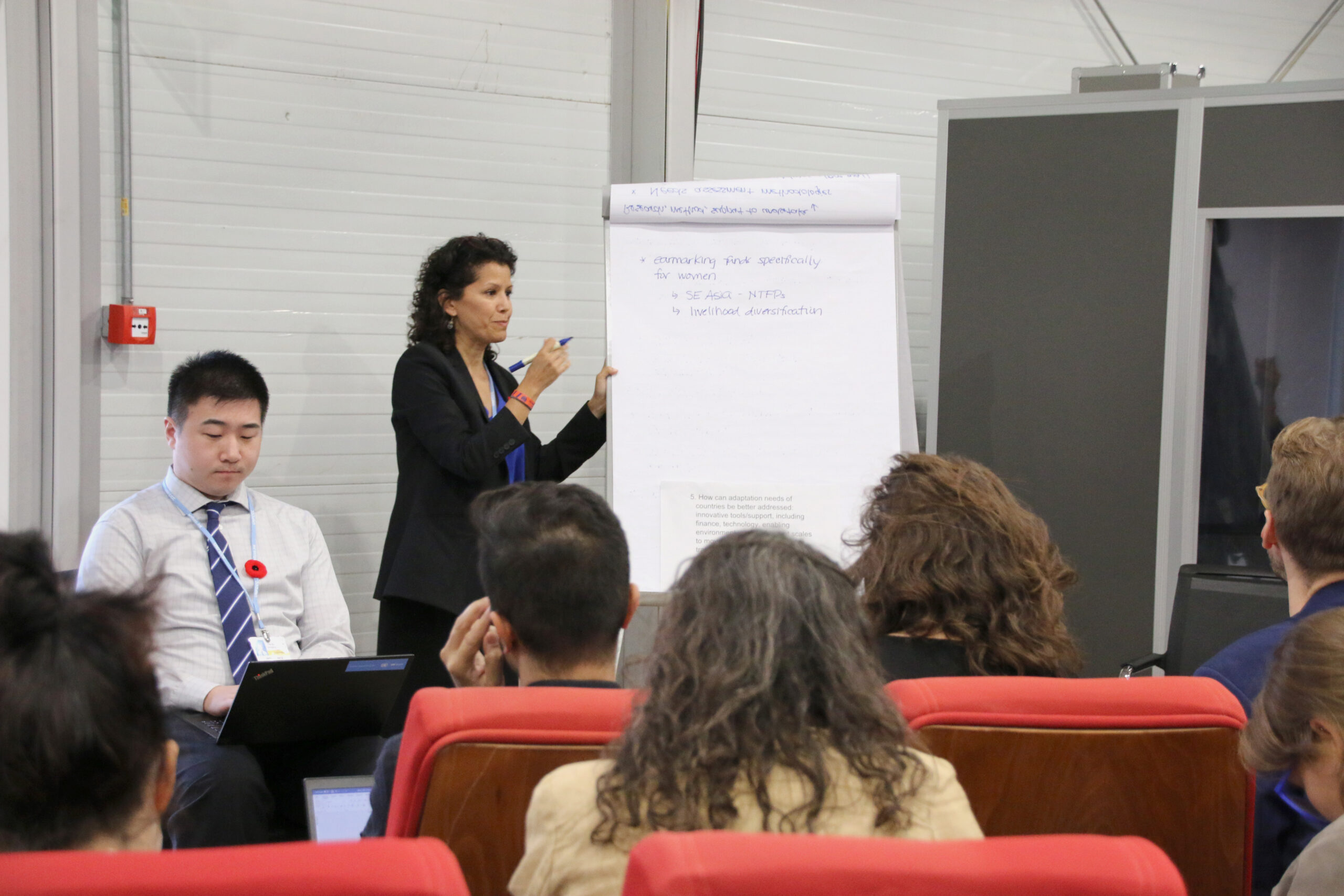 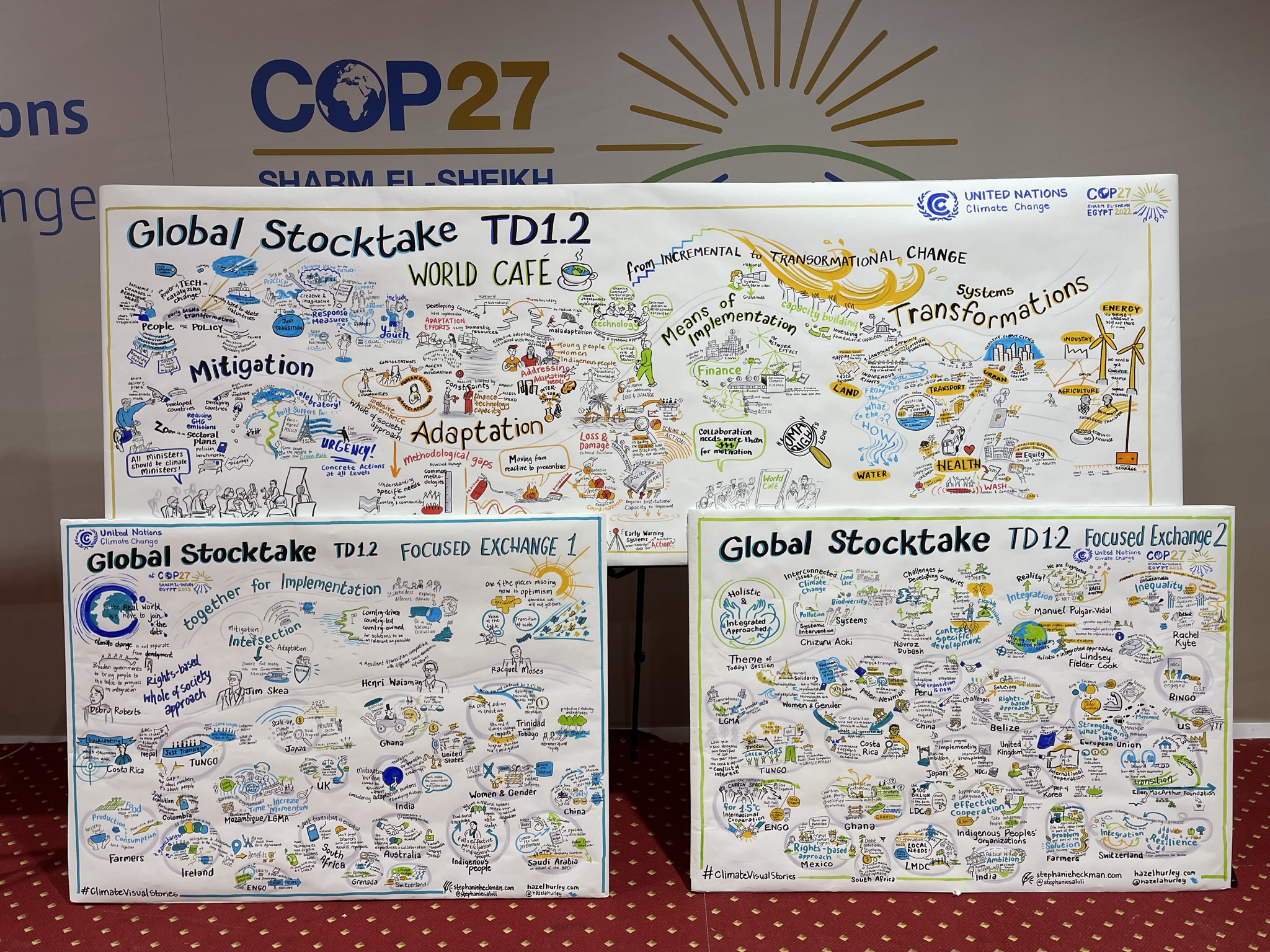 Graphic reporting on the Technical Dialogues of COP 27 for the Global Stocktake.