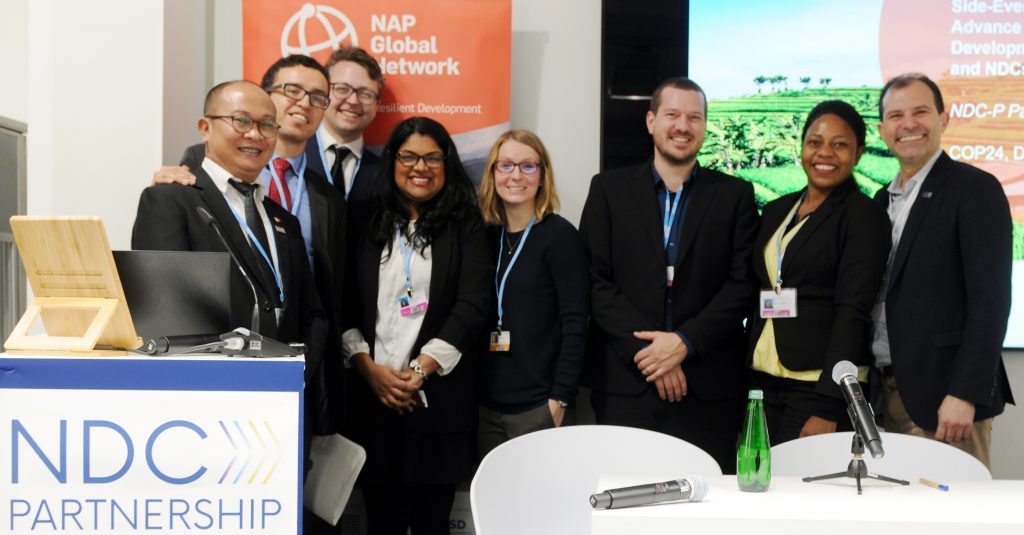 This event was organized by the National Adaptation Plan (NAP) Global Network whose Secretariat is hosted by the International Institute for Sustainable Development (IISD). Participants convened to explore ways to advance implementation of adaptation needs and goals by realizing linkages between the NAP process and nationally determined contributions (NDCs). At the outset, the objectives of the event were to better understand:

Anika Terton, NAP Global Network, presented on the connections among the global agendas related to climate change, DRR and the Sustainable Development Goals (SDGs). Pointing to a workshop on strengthening alignment of NDCs and NAPs in Thailand in 2018, she highlighted that 15 countries mapped their alignment of the two processes, which exposed that all countries would want the processes aligned in future. Terton highlighted the political, coordination and institutional challenges related to this alignment, and pointed to the opportunities for enhancing alignment, including the efficient use of climate finance and even leveraging additional financing.

Malte Maass, Deutsche Gesellschaft für Internationale Zusammenarbeit (GIZ), highlighted the confusion between functions and roles of the NDC and the NAP process, noting that NDC focuses on mitigation, while the NAP is a rolling plan aimed at integrating climate adaptation planning into national planning processes. Stressing that climate resilient development is at the heart of the Paris Agreement, the Sendai Framework and the SDGs, he highlighted the need to find synergies in implementing these three agendas to avoid duplication of work and financial resources.

Jerome Ilagan, the Philippines, highlighted the need for solid “policy grounding” to link NAPs and NDCs, and shared that the Philippine National Climate Change Action Plan is the foundation of the NAP and NDC. Stressing the importance of understanding local-level needs to plan for specific risks, he noted the importance of national stocktaking exercises, which are informed by local-level actions. He stressed the complementarity of the Paris Agreement and the Sendai Framework in addressing the many typhoons that plague the region, pointing to work under the Association of Southeast Asian Nations (ASEAN) to address regional adaptation plans.

Vositha Wijenayake, Sri Lanka, outlined that the country links the NDC and NAP processes to avoid duplication of efforts, and highlighted that Sri Lanka is also trying to integrate actions related to DRR and climate change in implementing the SDGs. She stressed the need for capacity building as well as a binding mandate for various agencies to align the two issues. On regional bodies, she suggested sector-based NAPs that could positively affect the region, for instance adaptation measures in the agriculture sector.

Emily Fadzai Matingo, Zimbabwe, discussed her country’s vulnerability to climate change due to its dependence on rain-fed agriculture, and noted that the country is exploring both adaptation and mitigation strategies in this sector. She also highlighted the need to mainstream gender in the NAP process to ensure countries include the voices of women and vulnerable groups in adaptation planning and in the NDC process, calling on development partners to assist in this regard. She said that the strong political will at the level of the Office of the President has ensured the country can address climate change.

Commenting on the importance of resilient development, Edgar Hernán Cruz Martínez, Colombia, pointed to the gap in translating national frameworks to local decision-making processes. He noted that the first point of entry into alignment of the NAPs process and the NDC is at the local level, stressing that national level planning must consider all the resources needed for implementation at the local level. He shared that adaptation, risk management and Colombia’s NDC are integrated, noting that for the second round of the NDC an indicator-tracker system will be implemented to track mitigation and adaptation plans and actions.

Noting that the Partnership supports governments in identifying country needs for NDC implementation, Robert Bradley, Knowledge and Research Director, NDC Partnership, highlighted that no country has mastered the alignment of NDCs and NAPs. He stressed that the NDC process is iterative, pointing to opportunities for alignment, and underlined the importance of finance for implementation. Stressing the importance of a country-led process, he pointed to individual countries’ efforts to ensure development partners can target their support most effectively. Acknowledging that building capacity takes time, he pointed to the Philippines work on GHG monitoring plan as an example of a lasting, sustainable initiative.

In the ensuing discussion, participants considered: opportunities available for aligning NDCs and NAPs in Zimbabwe; trade-offs between NDCs and NAPs; challenges in advancing adaptation in NDCs; the role of regional integration in the NAP process, including South-South learning; and the role for alignment at both the sub-national and the national levels.