Canada also supported a Targeted Topics Forum attended by representatives from 21 countries, as well as the development of a series of knowledge products on how the NAP process can be an opportunity to address gender inequalities that influence vulnerability to climate change.

“Canada has adopted a Feminist International Assistance Policy to advance gender equality and the empowerment of women and girls”—Kim Chretien, @environmentca, speaking at our workshop with 21 countries on how to make climate change adaptation actions gender-responsive. pic.twitter.com/821WGCASLE 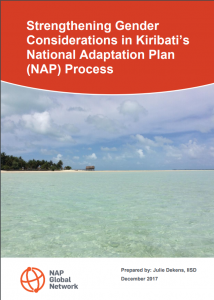 In Kiribati, the NAP Global Network supported the Climate Change Unit in the Office of the President to create the Kiribati Integrated Vulnerability and Adaptation Assessment (KIVA) database.

The KIVA draws on thinking from the Pacific Islands Integrated Vulnerability (IVA) Assessment Framework, which sees IVA as providing a common overarching framework for adaptation decision making that allows for the comparative analysis of vulnerability across sectors and levels of governance.

Kiribati’s national IVA framework and database will help the government identify and track people and places that are particularly vulnerable to climate change, and monitor and evaluate the implementation of adaptation projects and programs. The Network supported trainings to ensure continued enhancement and use of the database.

The Network also worked with the Office of the President to update and enhance the Kiribati Joint Implementation Plan on Climate Change and Disaster Risk Management (KJIP), which serves as the country’s NAP document. In particular, the Network helped to strengthen gender considerations in the KJIP, as well as alignment with development plans and the Kiribati 20 Year Vision released after its original completion. 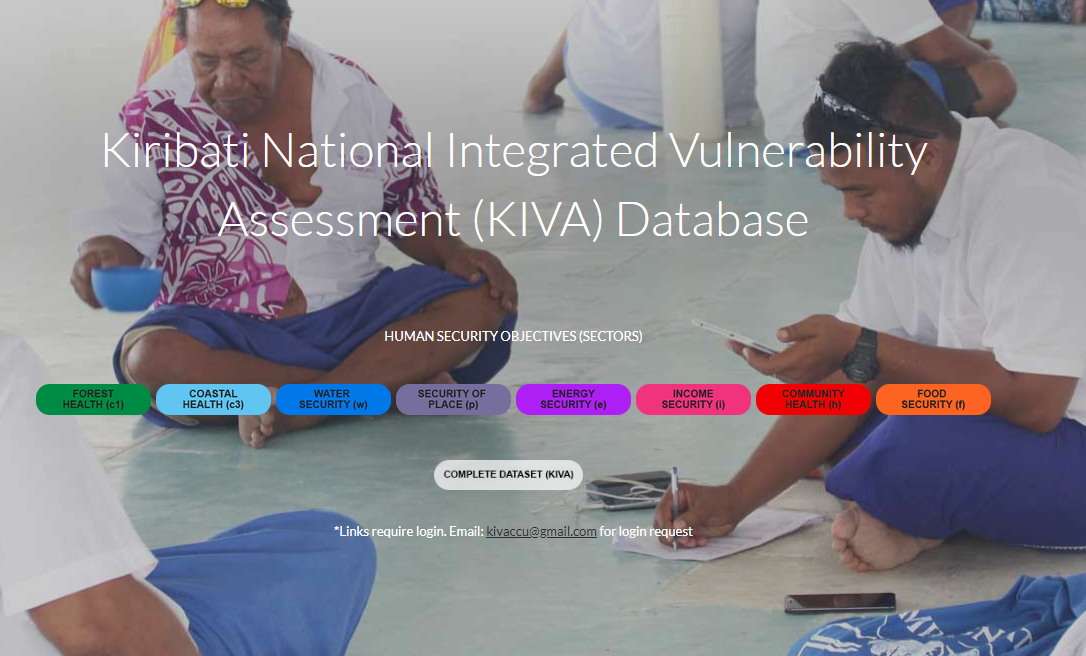 The Government of Tuvalu requested support from the Network to provide training and support for the information of community-level data collection to inform vulnerability assessments for eight outer islands.

The Network also supported the Government of Tuvalu with the development of a national IVA database, which will include the collected community-level data.

In Solomon Islands, the Network worked with the Ministry of Environment, Climate Change, Disaster Management to develop a national vulnerability assessment framework and database. Guided by input from key stakeholders regarding its scope and content, the national vulnerability assessment framework and database will inform the development, implementation, and monitoring and evaluation of the Solomon Islands’ NAP process.

The Network also supported the Solomon Islands to complete training and pilot testing of mobile IVA data collection, as well as undertake initial field work in Malaita province. This experience will be used to collect additional information for inclusion in the country’s IVA database. 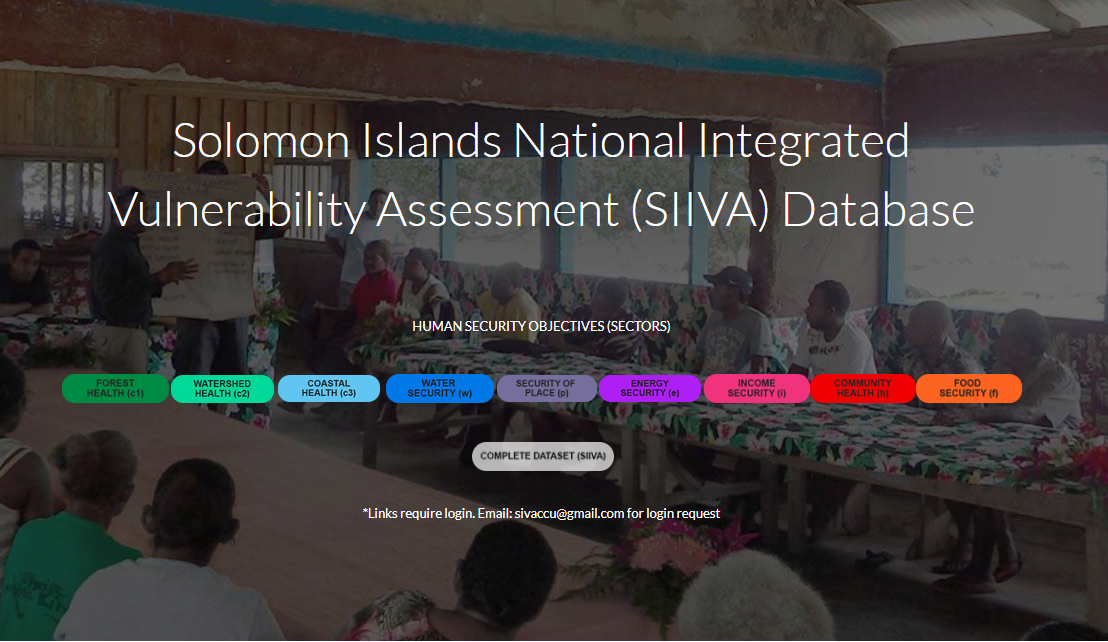 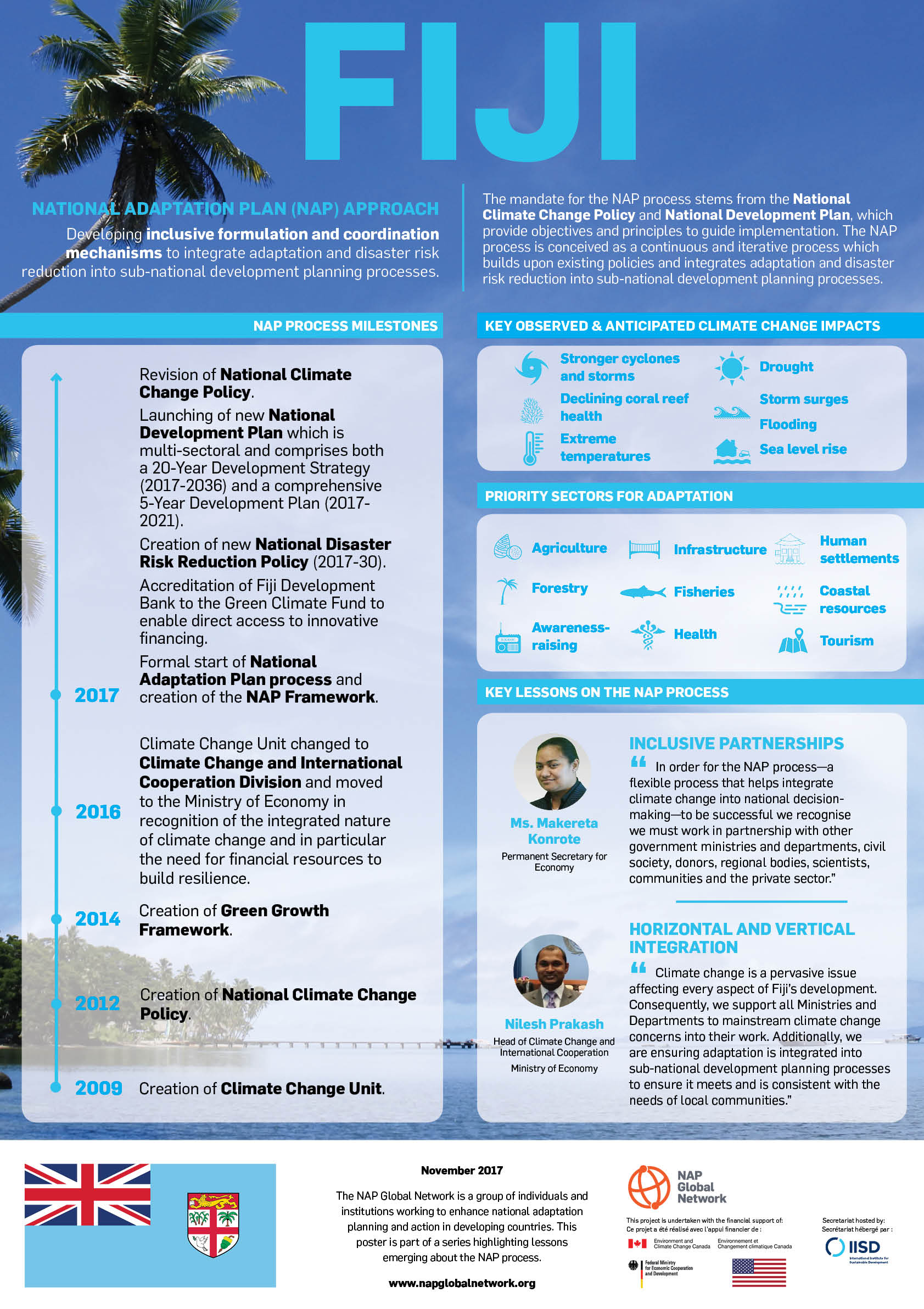 The Government of Fiji requested support from the NAP Global Network to hire an embedded advisor in the Ministry of Economy to help advance Fiji’s NAP process.

The advisor, Dr. Adrian Fenton, worked with the Government of Fiji to develop a NAP Framework that was endorsed by Cabinet and launched at COP 23. The NAP Framework sought to align the NAP process with the National Climate Change Policy and set out a vision to integrate climate risk into national development planning, policies and programs.

“Climate change is a pervasive issue affecting every aspect of Fiji’s development. Consequently, we support all ministries and departments to mainstream climate change concerns into their work,” said Nilesh Prakash, Fiji’s Head of Climate Change and International Cooperation, Ministry of Economy.

Fenton has supported a series of stakeholder consultations and technical inputs, working with the Government of Fiji towards the development of a NAP document that is anticipated to be completed later in 2018. With Canadian funding for in-country NAP support concluding in March 2018, a new work program supported by the United States will see the continuation of this work.

Read more about Fiji’s NAP process in this overview poster. 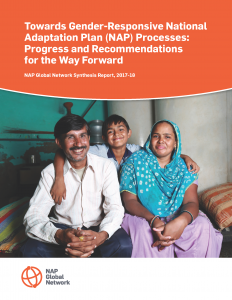 In addition to the gender analysis the Network supported in Kiribati, we also looked to get a broader view of how gender is being integrated into NAP documents internationally. The results of this analysis were recently published in our report, Towards Gender-Responsive NAP Processes: Progress and Recommendations for the Way Forward.

This report is based on a review of completed NAP documents available on NAP Central at the end of January 2018, as well as data collected directly from country NAP teams. It found that most countries have made an effort to integrate gender considerations into their NAP documents, but that there remain a number of common challenges to be addressed.

The Targeted Topics Forum in February 2018 also dedicated a day to exploring lessons and best practices on gender-responsive NAP processes.