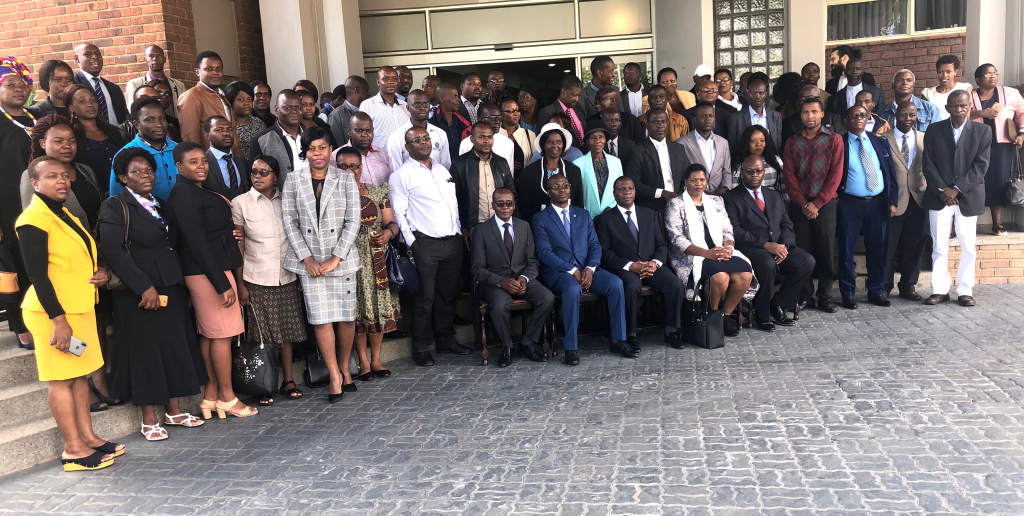 over 100 participants gathered in Bulawayo, Zimbabwe, to attend the launch of Zimbabwe’s National Adaptation Plan (NAP) Readiness Project, financed by the Green Climate Fund. Before embarking on the GCF–NAP Readiness Project, the Government of Zimbabwe developed its NAP roadmap. The primary goal of the NAP roadmap is to assist in reflecting what needs to be done by the Government of Zimbabwe during the NAP process and who are the key actors. It sets the pace for the implementation of the project against its expected indicators, outcomes and overall impacts. The roadmap will subsequently be used by the government to ensure that their programming is within the project’s timelines and that responsible actors within the project are aware of their assignments and interventions.

In order to define outputs and key milestones of the NAP roadmap, a stakeholder consultation process was established to answer important questions around gaps in capacity, existing mechanisms, entry points, programming and opportunities to promote the integration of climate change adaptation into different sectors and policies. According to Washington Zhakata, Director of the Climate Change Management Department, “Given the NAP process for Zimbabwe is to result in the mainstreaming of climate change, there was need to consult senior policy-makers in the government overseeing key important socioeconomic sectors underpinning the country’s economy, such as water, health, agriculture, energy, infrastructure, forest and biodiversity.” He continued, “These sectors require urgent climate-proofing if the country is to meet its climate change targets of resilience in a low-carbon trajectory.”

Stakeholders consulted welcomed the idea of developing a NAP to bridge the gap between uncoordinated and non-coherent interventions that have defined the climate change discourse in Zimbabwe. It was also noted that the NAP process ought to have a finance strategy for it to be sustainable, otherwise it risks becoming a shelved plan just like many other plans before it. While the GCF–NAP Readiness Project does not have a direct component focusing on provincial adaptation plans, the roadmap development process notes the need for vertical integration of climate change adaptation at the subnational and provincial levels.

During the validation of the NAP roadmap, Joseph Gondo, Principal Director of the Crops and Livestock Department , highlighted that, “For the NAP process to be successful, there was need to adopt a participatory approach that involved the policy-makers as well as people at the grassroots level. Such an approach in adaptation planning would ensure that no one is left behind,” he asserted. This blend in policy formulation recognizes that adaptation to climate change is localized and requires community involvement as well as incorporating Indigenous knowledge systems (IKS), which are recognized by the National Climate Policy (2017) as resilience-building interventions. In the same vein, Morage Watt, a representative of a women’s group active in the field of climate change, emphasized that, “There was need to ensure that vulnerable groups, which include women, children, people with disabilities, youths and children, are consulted during the NAP development process towards living no one behind.” She went on to say that “the government should realize the potential role of women in climate change adaptation, realizing their custodian role to natural resources which ironically they do not have claims to.”

A key nugget of the NAP process is the working groups. According to the Environmental Management Agency, for the NAP process to be effective, there is a need to upscale the NAP working groups established under the pilot project (in Buhera, Chiredzi and Chimanimani 2015– 2018). Washington Zhakata pointed out that “well-supported working groups provide an important platform for enhancing the mainstreaming of climate change into key socioeconomic sector-based plans identified in the National Climate Policy.”

Some key lessons were drawn from the development of the NAP roadmap to support the success of the NAP process. Technical and institutional capacities will need to be enhanced for the government to effectively mainstream climate change to reduce vulnerability. Existing local government structures, including sectorial heads, line ministries, provincial arms and district arms, will need to be engaged to ensure that climate change is successfully integrated into development frameworks. In addition to that, and to ensure that the NAP process leaves no one behind, vulnerable groups including women, children and youth will need to be consulted throughout the NAP development process. To improve the dissemination of climate information, a financed NAP Working Group system will be required to exchange lessons learned on adaptation planning formulation and the integration of climate change in the country, which is something that couldn’t be done before due to a lack of resources. Finally, in order to mobilize additional financial resources, the GCF–NAP Readiness Project will explore ways to engage with the private sector on adaptation investments.

The validation of the NAP roadmap on the margins of the launch of the GCF–NAP Readiness Project gave NAP stakeholders a platform to input into the draft roadmap before its finalization. This also provided the opportunity to clearly elaborate the roles and responsibilities of the different stakeholders of the NAP process in Zimbabwe.

The NAP process in Zimbabwe will enable the country to mainstream climate change adaptation towards climate resilience. This will be achieved through: 1) the strengthening of technical and institutional capacities; 2) the efficient collection and dissemination of climate information; 3) the appropriate mobilization of financial resources; and 4) an effective monitoring and evaluation system. Addressing these four components will help bridge the gaps in Zimbabwe’s adaptation planning process.