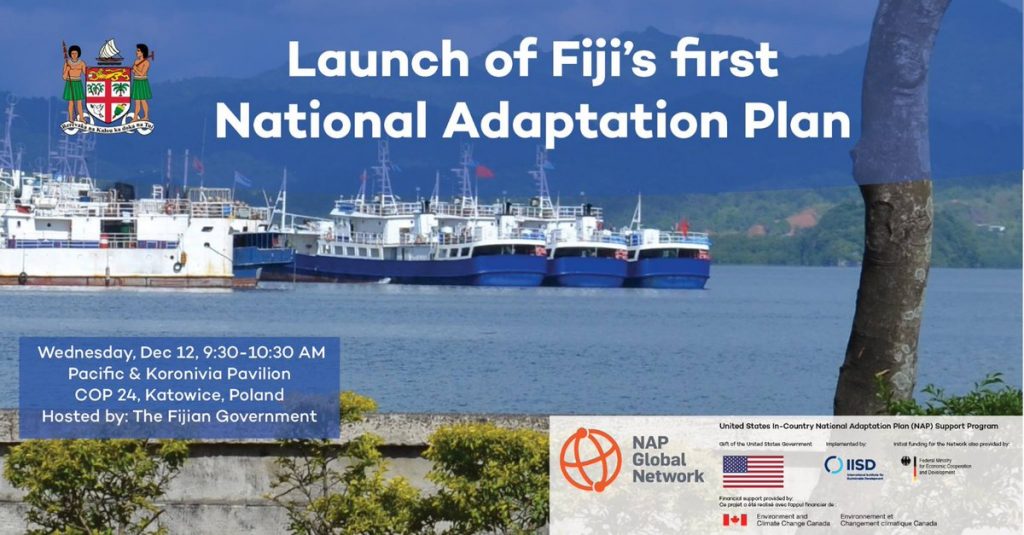 This document, which was launched during the COP 24 United Nations Climate Change Conference with support from the NAP Global Network, is Fiji’s first-ever NAP.

“Climate change is already posing major risks to Fiji’s economy, society, and way of life, said Nilesh Prakash, Head of the Climate Change and International Cooperation Division, and the Fijian Delegation to COP24 in Katowice. “It is not a future problem, but one which is already evident. Fiji’s National Adaptation Plan process is crucial for building our country’s resilience to this global threat.”

This NAP is the latest initiative by the Fijian Government in its quest to build the resilience of the Fijian society and economy.

“This document provides a clear vision for adaptation and identifies priorities to be addressed in partnership with development partners, private sector entities and academic institutions over the next five years, and beyond,” said Anne Hammill, Director of the NAP Global Network Secretariat.

“In order for Small Island Developing States like Fiji have a chance to adapt to climate change before it’s too late, the rise in global temperatures needs to be contained,” said Dr. Adrian Fenton, an advisor to the Fijian Government who has been supporting the Ministry of Economy with the development of Fiji’s NAP process. “The NAP document was developed through extensive consultation with Fijians, and reflects their priorities for adaptation action that will preserve Fiji’s society, economy, and way of life.”

The NAP document is available here.