The linkages between gender and climate change adaptation have been recognized as a key issue under the United Nations Framework Convention on Climate Change (UNFCCC) since the early 2000s. The 2015 Paris Agreement increased the ambition on gender, referring to gender equality and women’s empowerment and calling for action on climate change to be gender-responsive.

With its participatory and iterative approach, the National Adaptation Plan (NAP) process is a key opportunity to integrate gender considerations, in an effort to address gender inequalities and ensure that adaptation actions are effective and sustainable.

To understand how countries are addressing gender issues in their NAP processes, in April 2017, the NAP Global Network undertook a pilot review of NAP-related documents, including national adaptation plans and adaptation plans for key sectors, covering 15 countries in Africa, Asia and the Americas.

This involved a systematic review of the documents, building on the methodology used for the review of Nationally Determined Contributions (NDCs) by the Gender Climate Tracker. The review was structured around a set of key questions based on the working framework presented in Figure 1. Given that most countries are in the early stages of their NAP processes, we focused this pilot review on the planning and institutional arrangement dimensions.

Figure 1. Gender in the NAP process. (Click to zoom) 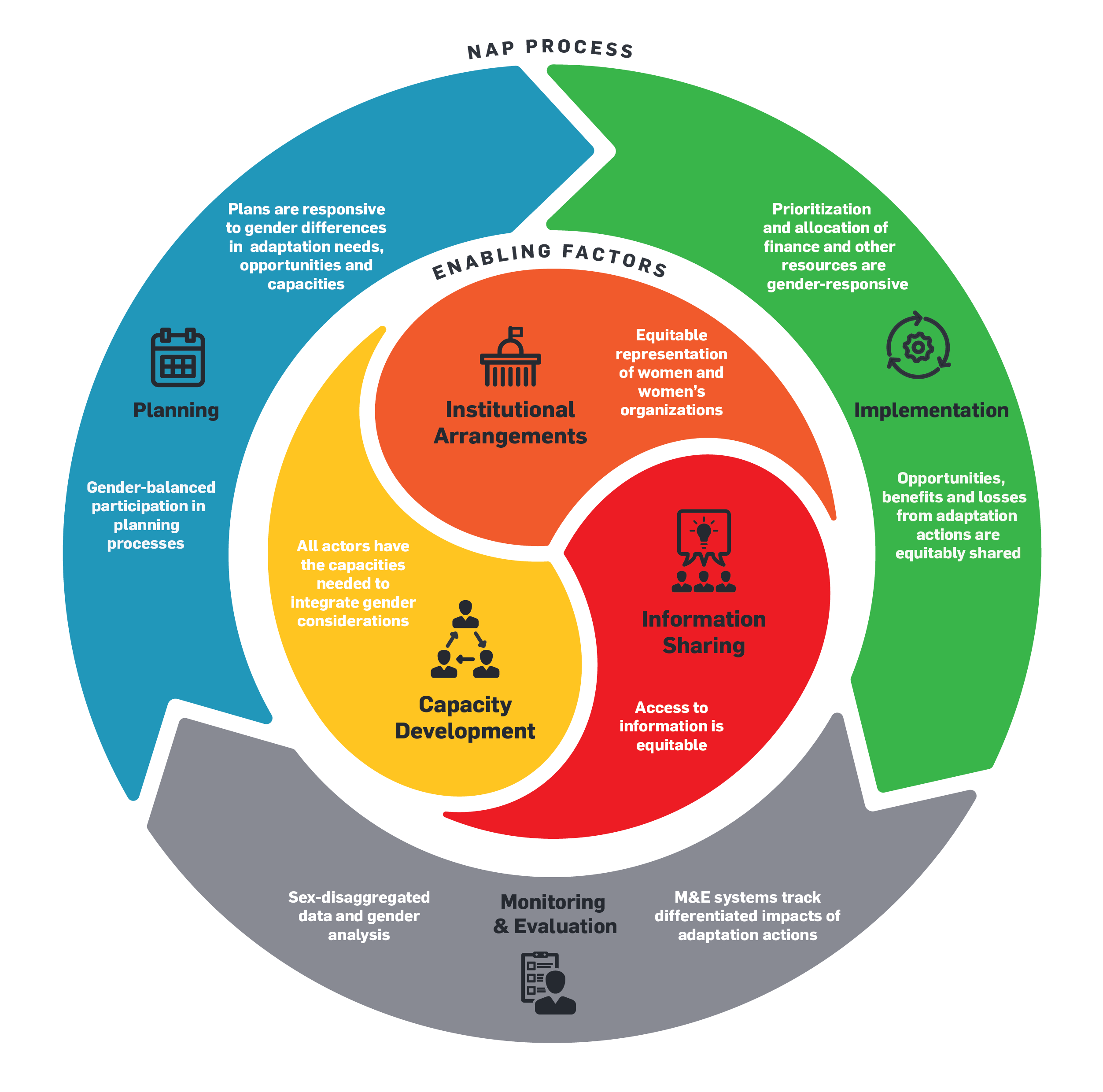 This pilot review provided an opportunity to test the framework and to undertake an initial synthesis of learning from these early adaptation planning documents.

We found that most of the countries targeted by the review are indeed making an effort to integrate gender in their NAP documents, as a cross-cutting theme, an objective or a principle.

This is very positive, as it establishes an entry point for increasing attention to gender considerations as countries progress in their NAP processes. However, our review also revealed a few key gaps:

These gaps highlight the need for a concerted effort by the actors leading and coordinating NAP processes, as well as stakeholders and development partners, to keep gender considerations at the centre in adaptation planning processes and, importantly, to communicate how this is being done and the difference that it makes.

This will be an area of focus for the NAP Global Network over the coming year, including further development of the review framework and periodic synthesis of progress and learning on integrating gender considerations in NAP processes.