As many of the impacts climate change are felt most acutely at the local level, it is vital that the people who are at the forefront of climate change—those who are experiencing the impacts—really have a say in national-level policy.

This is why it is so imperative for countries to engage in forming National Adaptation Plans (NAPs) to find approaches to “vertical integration.” A recent guidance note defines vertical integration as “creating intentional and strategic linkages between national and sub-national adaptation planning, implementation and monitoring & evaluation (M&E).”

The NAP Technical Guidelines stress the importance of vertical integration, with good reason.  Vertical integration provides an opportunity to overcome many of the barriers to adaptation. For example, sub-national governments may find it difficult to generate resources and financing for adaptation activities; through vertical integration, closer links with national-level frameworks and a closer link with national governments can help facilitate flows of finance, either from national funds like India’s National Adaptation Fund for Climate Change or through international funds like the Green Climate Fund.

The Action on Climate Today initiative has been supporting the governments of Nepal and India in developing their NAPs. Both countries are making exciting progress, and the process in Nepal, I believe, is one of the most consultative and robust NAP formulation processes that is unfolding anywhere in the world. Here are three key routes through which vertical integration is taking place in Nepal. 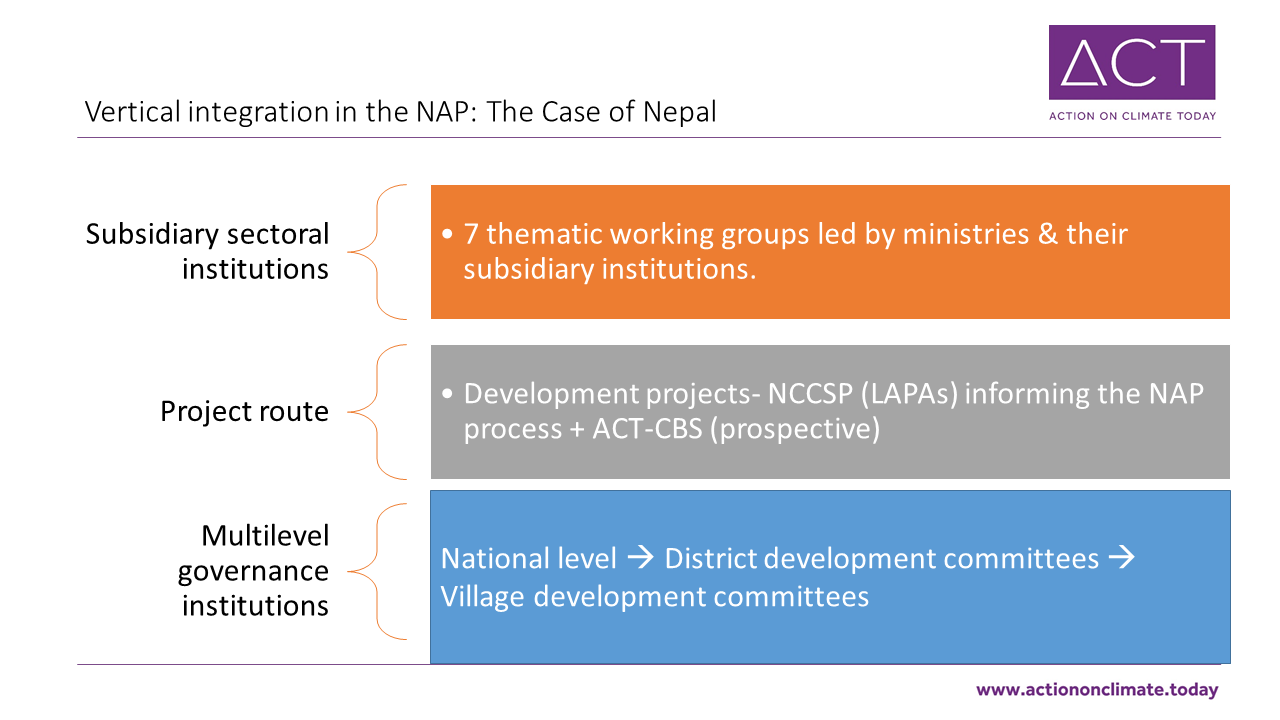 At the heart of the process are seven thematic working groups that are working at the national level to define sectoral adaptation priorities for the NAP. Each of these working groups is led by sectoral national line ministries such as water, agriculture, health, urban development and tourism.

There are also two cross-cutting working groups: one on gender and one on governance. At the national level, it is these groups of empowered actors that are coming together in this cross-sectoral manner to help take adaptation planning forward. Now each of these national level institutions have subsidiary institutions at the district and local levels, and these institutions are also a part of the consultation process of the NAP. 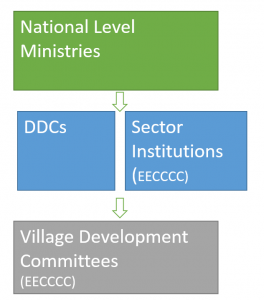 Another way in which vertical integration is taking place in the NAP development process in Nepal is through multi-level governance institutions.

There’s a third and quite interesting route through which vertical integration in the NAP is manifesting itself: Nepal has a very rich constellation of actors who are working on different kinds of adaptation programs funded by donors and other entities across scales. The NAP process is linking in with all of these actors to make sure that they are drawing on the right insights.

For example, the Nepal Climate Change Support Program (NCCSP) is a donor-driven adaptation program that has helped to develop Local Adaptation Plans of Action. The NAP process is drawing on M&E data from the NCCSP to make sure the NAP that they are consolidating is informed by the insights of this donor-driven program that works at the local level.

Similarly, Action on Climate Today—which is funded by the U.K. Department for International Development—has worked with Nepal’s Central Bureau of Statistics to undertake a survey with 5,000 households to understand climate impacts, including perception based on subjective data. We are now working to make sure that this survey data informs NAP development.

Through these three key routes, Nepal is making excellent progress on vertical integration so that local voices are being heard as part of the NAP process.

As part of a recent webinar hosted by the NAP Global Network, I interviewed Batu Krishna Uprety, a senior bureaucrat and Team Leader of Nepal’s NAP Formulation Process. Batu-ji said:

“Because the NAP approach is based on the  ‘leave no one behind’ principle, we’ll ensure that local governments and communities have a say in identifying adaptation priorities.”