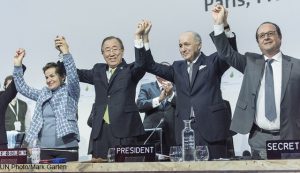 Meeting the Paris Agreement’s temperature goal will require strong, ambitious and long-term commitment from governments, private industry and citizens in all countries. Yet, even if this ambitious target is reached, countries will still need to adapt to a changing climate.

Here are some key ways that the Paris Agreement will reinforce and build on the United Nations Framework Convention on Climate Change’s prior commitments related to NAPs, and that will potentially affect developing countries’ adaptation efforts.

The Paris Agreement reinforces the acknowledgement that adaptation planning processes are vital to social and economic development; that adaptation action, including NAP processes, should be country-driven, inclusive and transparent; and that the urgent and immediate needs of developing countries that are particularly vulnerable to the impacts of climate change must be recognized.

The Paris Agreement reiterates countries’ long-standing commitment to enhancing adaptation action by sharing information, good practices, experiences and lessons learned as they relate to adaptation planning and implementation, among other things. Countries that are already involved in creating and implementing NAPs have a wealth of knowledge about this process and can provide momentum. Dedicated South-South knowledge-exchange and peer-learning forums, such as those offered by the NAP Global Network, will therefore play an important role in advancing this effort.

In addition to calling for all countries—not just developing ones—to undertake NAP processes, the Paris Agreement also calls on countries to improve the “effectiveness and durability” of their adaptation actions. Achieving this objective would be supported in part by monitoring, evaluating and learning from adaptation planning and implementation as emphasized in the agreement. These insights are to be reported through periodic submission of adaptation communications.

Such monitoring and review is expected to inform countries’ efforts to enhance their approaches to adaptation and reinforces the need for NAPs to be iterative processes. Attention should be paid, however, to resources and capacities required for countries—especially the least developed countries—to meet these monitoring and reporting requirements.

The Paris Agreement sets the expectation that countries will continually enhance their efforts to address climate change—including with respect to adaptation. In part, this will be driven by a “global stocktake” process that will occur every five years starting in 2023. Countries will be expected to ratchet up their adaptation actions and donors will be expected to enhance their commitments to support efforts by developing countries.

These five-year cycles provide a clear timeframe for action and are well-aligned with political timeframes, which will hopefully complement national planning and coordination of bilateral support for adaptation. Ideally, the “monitoring, reporting and review” component of the NAP process will inform countries’ contributions to this global stocktake, reporting not only on adaptation needs and priorities, but also whether enough planning is in place and enough action has been taken.

A Lack of New Financing for Adaptation?

The Paris Agreement also leaves several issues unaddressed. Prominent among these is whether there will be an increase in financing for adaptation. While there was a flurry of adaptation funding announcements during COP21 (including, for example, the United States’ exciting announcement that it will double its support for adaptation to  USD 800 million per year), the Paris Agreement extends to 2025 the target of mobilizing USD 100 billion per year initially agreed upon in 2009 during the Copenhagen Climate Conference.

The spirit of the Paris Agreement is that there will be “continuous and enhanced international support” to enable developing countries to implement their adaptation commitments under the agreement. There is also a promise that scaled-up financial resources will “aim to achieve a balance between adaptation and mitigation,” and take into account the priorities and needs of developing countries, especially those that are most vulnerable to climate change. Despite these promising signs, it remains to be seen how much financing will actually be available for adaptation after 2025.

Implications for the NAP Global Network

As the NAP Global Network looks to scale up our efforts in 2016, we welcome the Paris Agreement’s reinforcement of international cooperation on adaptation, which is at the core of our work. In our upcoming activities, the Network will continue to promote cooperation by fostering South-South knowledge sharing between countries involved in the NAP process. It will also strengthen the institutional working arrangements for NAPs that the Paris Agreement calls for by supporting the coordination of bilateral donors and helping to ensure that adaptation funds are used effectively. In doing so, the Network will help countries meet their own adaptation goals and contribute to the ambitious and long-term action needed to ensure the success of the Paris Agreement.

See also: The NAP Global Network will host our 2nd Targeted Topic Forum in Jamaica from March 15 – 17, bringing the in-country experts and bilateral donors together to talk to share lessons about the NAP process.