ADDIS ABABA—Ethiopia has launched their National Adaptation Plan (NAP-ETH) document, setting out priority actions for the country prepare for the impacts of climate change.

According to a Government of Ethiopia news release, the NAP-ETH seeks to “bring about transformational change in the country’s capacity to address the adverse consequence of climate change.”

The strategic priorities of the NAP-ETH are to mainstream climate change adaptation into development policies, plans and strategies; build long-term capacities of institutional structures involved in NAP-ETH; implement effective and sustainable funding mechanisms; advance research and development in the area of climate change adaptation; and improve knowledge management.

The Ministry of Environment, Forests and Climate Change (MEFCC) has been the focal ministry for the Ethiopia’s NAP, coordinating consultations with other line ministries and sub-national stakeholders. 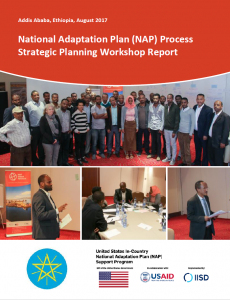 With the NAP-ETH launched, the Ethiopian government with now look to further develop implementation strategies.

To support these efforts,  the NAP Global Network worked with MEFCC through the US In-Country NAP Support program to host a strategic planning workshop in August 2017 to identify priority actions to support NAP implementation, focusing on the NAP-ETH’s strategic priorities.

A theme that emerged during this workshop was vertical integration of adaptation across national and sub-national governments (read a blog which looks at this in more depth). Vertical integration is critical for key principles for the NAP document, including participation, stakeholder empowerment, gender sensitivity and equitable implementation.

Participants noted that noted that communities must be involved in prioritization and planning, and that upcoming regional workshops will be an important step to engage communities. 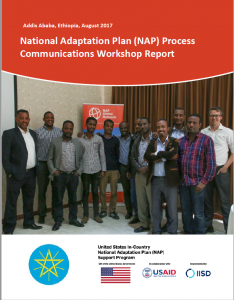 Participants noted that internet usage is limited in Ethiopia, so while web-based communication channels are important for international audiences, other channels such as radio, television and print media are very important, as well as making use of established word-of-mouth channels (for example, communicating climate change adaptation messages to clan leaders who can disseminate messages throughout their clans).

Linguistic diversity among national audiences was noted as a potential challenge, and potentially seeking financial support from a development partner for a dedicated national communications campaign was discussed.