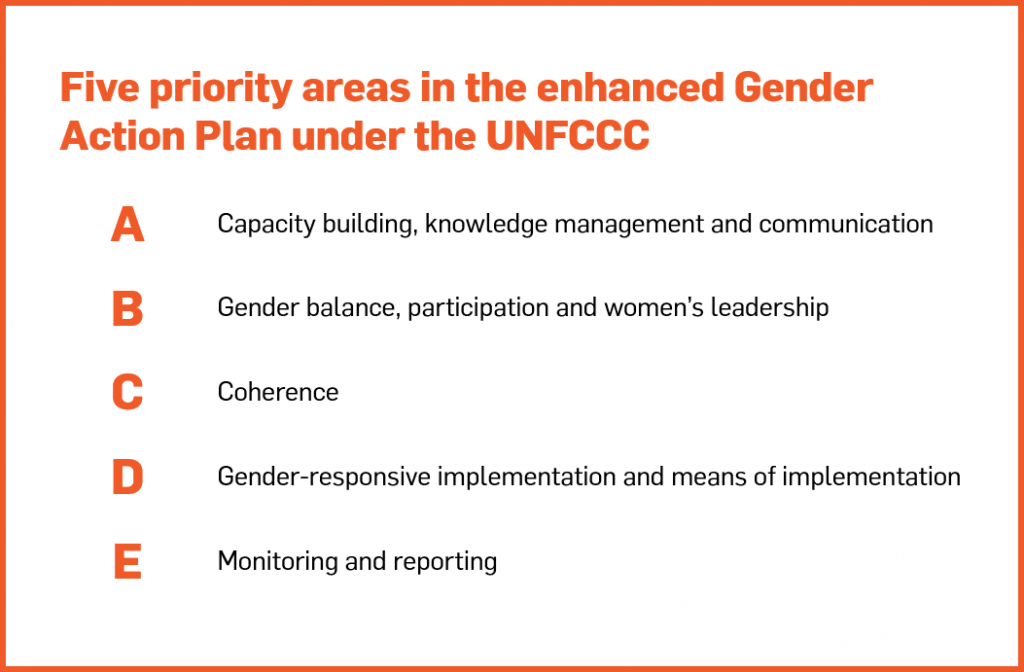 While COP25 was underwhelming in terms of its results, there was one bright spot in relation to addressing the gender dimensions of climate change under the United Nations Framework Convention on Climate Change (UNFCCC).

Over the course of 2019, UNFCCC Parties and stakeholders undertook a process to review the Lima Work Programme on gender (established in 2014 and extended in 2016), as well as the Gender Action Plan (GAP), which was agreed in 2017.  These commitments aimed to mainstream a gender perspective into all elements of climate action, as well as to advance women’s full, equal and meaningful participation in the implementation of the Convention.

At COP25, an Enhanced Lima Work Programme on Gender and its GAP were adopted, providing a roadmap for gender-responsive climate action under the UNFCCC over the next five years. The decision acknowledges Parties’ commitments in relation to human rights, gender equality and the empowerment of women. It recognizes the role played by UNFCCC Parties and stakeholders, as well as the Secretariat, in promoting gender-responsive climate action, and the need to support developing countries in this regard.

The enhanced GAP has five priority areas, with associated activities for each. It reflects an increased focus on implementation, including efforts to improve access to finance for local communities, women’s organizations and Indigenous Peoples. It also highlights the need for gender-equitable participation in planning and climate action at all levels.

National Adaptation Plan (NAP) processes are an essential component of national governments’ responses to climate change. In addition to identifying and prioritizing adaptation options, implementing these options and tracking progress and results, NAP processes are expected to put the systems and capacities in place to ensure that adaptation action is effective.  This facilitates the achievement of adaptation commitments in nationally determined contributions (NDCs), toward the realization of the global adaptation goal of the Paris Agreement.  As an iterative, participatory process, NAPs present considerable opportunities to incorporate gender-responsive approaches in line with the GAP.

With that in mind, we’ve identified five key ways that NAP processes can support the implementation of the GAP over the next five years:

NAP processes bring different stakeholders together and establish the institutional arrangements that are necessary for governments to plan and implement adaptation actions.

These efforts create platforms that can be used to build capacity on gender and adaptation, toward integration of gender considerations in relevant plans and actions (GAP Activity A.1). NAP processes are also enabling countries to identify and engage experts on gender and climate change, while also providing a basis for knowledge sharing both within and across countries (GAP Activities D.4 and D.6).

For example, at our Targeted Topics Forum in 2018, the NAP Global Network brought representatives of 20 countries together in a participatory learning and dialogue process on gender-responsive NAP processes. At the country level, NAP consultations and workshops (such as this one in Jamaica) are bringing different stakeholders together to discuss gender and adaptation issues. This illustrates how the NAP process can serve to convene relevant actors to enhance capacity and exchange knowledge on gender-responsive approaches to adaptation.

A key element of the NAP process is the assessment of vulnerabilities and capacities related to climate change.

Increasingly, countries are applying a gender lens to this analysis, such as in Benin and Togo (links to reports in French), where the governments undertook dedicated gender analyses to inform their NAP processes. These analyses have highlighted the differentiated impacts of climate change on women and men and have provided concrete recommendations for ensuring that NAP processes respond to these differences, thereby strengthening the availability of sex-disaggregated data (GAP Activity D.7) and building the evidence base on gender and climate change (GAP Activity A.4). The process of doing these analyses has also increased in-country capacities to undertake and apply gender analysis (GAP Activity A.3).

The NAP process facilitates access to climate finance for adaptation by identifying priorities, assessing gaps for their implementation and developing resource-mobilization strategies. Finance is also an enabling factor for the NAP process—additional resources are needed for countries to formulate plans, implement adaptation actions and establish the necessary systems and capacities for climate-resilient development over the longer term. This creates opportunities for enhancing capacities to integrate gender considerations in decision making through approaches such as gender mainstreaming and gender-responsive budgeting.

A gender-responsive approach to the NAP process helps ensure that adaptation investments yield equitable benefits and that resources are channelled where they are needed most, including to women’s organizations, Indigenous Peoples and local communities (GAP Activity D.2).

As countries adopt gender-responsive approaches, they are increasingly conscious of the need to ensure gender balance and inclusion of vulnerable groups in the NAP process. This often requires particular efforts to ensure that gender actors and representatives of women’s groups are at the table in adaptation planning processes (GAP Activity D.5).

This is already occurring in some countries, such as in Fiji, where the process of developing the NAP document involved gender experts as well as women’s groups.

5 – Monitoring, Evaluating and Reporting on Integration of Gender in Adaptation Action

Many countries are establishing monitoring and evaluation systems for adaptation as part of their NAP processes. These systems can facilitate the collection of sex-disaggregated data (GAP Activity D.7) and ensure that progress on gender equality under the NAP process is tracked and reported on (GAP Activity E.2).

What’s Next for NAPs and the GAP?

Supporting country efforts to incorporate gender-responsive approaches in their NAP processes is a priority for the NAP Global Network. The enhanced GAP reinforces the mandate for this, reflecting a strong imperative for gender-responsive climate action under the UNFCCC.

With adequate investments by governments and development partners, we believe that the next five years can be a game-changer in terms of addressing the gender dimensions of climate change adaptation in a move toward more resilient and gender-equal communities and societies.